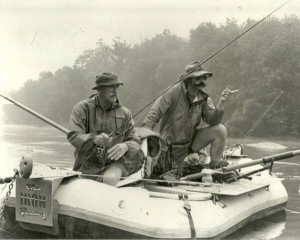 My last submission to the Good News Paper was a memorial tribute to a local legend, Ben Schley. Ever his disciple, I am still not sure if Ben was a fisherman who wrote or a writer who fished. I know many miss his nature articles which graced these pages and many other fine publications.

Ben was responsible for my graduate work in the finer points of fly-fishing and I am striving for his level of mastery, which rose above the need to catch fish. I received much instruction over our 15 years together, but mostly we shared frequent fishing trips. His course offerings included —perhaps his greatest gift to me —an introduction to the literature of the out-of-doors, particularly angling. No other sport has such a vast body of excellent works by such great writers: Ernest Hemingway, Zane Grey, Thomas McGuane, John Gierach, Roderick Haig-Brown, Howell Raines, Ernest Schwiebert, and Norman Maclean to name a few.  Several of Ben’s own stories appeared next to these great names in publications like Sporting Classics and Fly Fisherman magazines.

Arthur Ransom, in his book The Fisherman’s Library wrote, “Fishing books, lit by emotion recollected in tranquility, are like poetry…we don’t think of them as books but as men. They are our companions and not only river-side. Summer and winter they are with us and what a pleasant company they are.”

Howell Raines, Executive Editor of the New York Times, in his book Fly Fishing Through Midlife Crisis in which I received “honorable” mention for a trip we took together on a secluded section of the Potomac called the Trough, cited a few basic rules to which I subscribe. “Rule One: Always be careful about where you fish and what you fish for and who you fish with. Rule Two: Be even more careful about what you take home and what you throw back. Rule Three: The point of all fishing is to become ready to fly fish. Rule Four: The point of fly fishing is to become reverent in the presence of art and nature.”

Fishing and water are at the center of my life. I have fished at least fifty different bodies of water, from Yugoslavia to Montana, the Great Lakes to the Gulf of Mexico, from farm ponds to the sea, each trip a renewed opportunity for hope.

At age 6, on Squam Lake, New Hampshire, I caught “tiddlers” with a hand-line and yellow cheese; lying on a simple wooden dock, face down to within inches of the water, shoulder to shoulder with my father.

Ben and Bill in Yugoslavia 1989

At age 33, I ate thinly sliced wild boar washed down with slivovitz on the small balcony of a guest house overlooking the River Krca, 50 miles outside of Ljubljana, the capital of Slovenia. I can still smell the not-so-subtle hint of juniper berries in the gin-like distilled spirit, which actually tasted pretty good, as most cups shared streamside.  Ben and I had just waded the section of the river that flowed below us, stair-stepping through the middle of this storybook town, complete with 17th century church steeple in the frame. The fishing was unsurpassed, offering an endless supply of small ledges, pockets, and pools plentiful with large and selective rainbow trout.

This summer, my close friend Jack Winder, a 29-year veteran legal watchdog with the Environmental Protection Agency, joined me for my 46th birthday and some fishing on the Potomac. Jack and I met twenty years before as fellow basses in The Augmented Eight, a Washington-area a cappella group, but it took many all those years to get him out on the river with me. He eventually took my bait —no surprise—since his professional interests earned him the honor of “Washingtonian of the Year” as Executive Director of the Coalition for Clean Air.

We started our trip at Taylor’s Landing off Rt. 65 near Antietam Battlefield in my patented no-spill Old Town canoe. Polynesian-style outriggers allow a fly caster to do the unthinkable: stand up in the canoe to cast, without fear of capsizing. The rig was copied from a Sanibel Island guide, who, with the addition of an electric motor, used the stealthy canoe to stalk snook and redfish though the tidal pools of the mangrove swamps.

Jack and I focused our float on the stretch of the Potomac around Horseshoe Bend that Ben called the Horsebacks… the very same spot where we committed his ashes several years before. I still love to fish with Ben, no matter how many parts per billion. Here, long spine-like, almost supernatural, rock formations parallel the current, partitioning the flow of the river, creating spectacular cover for opportunistic smallmouth. The wading can be treacherous and the navigation equally challenging, but the fishing can be spectacular. 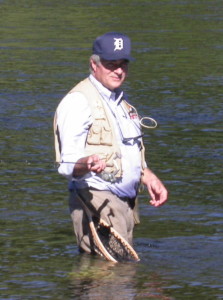 A dyed-in-the-wool Tigers and Wolverines fan, Jack was relegated to a desk job in Washington and hadn’t been fishing in a few years, but it was clearly in his Michigan blood. It didn’t take him long to fall under (and in) the river’s spell. It was a warm but windy day. Mending varying lengths of fly line to achieve casting distance, especially from the boat, was challenging as line wrapped its way around every available impediment.  We beached the canoe and Jack abandoned his vintage 3-weight Hardy bamboo fly rod, opting for a small ultra-light spinning rod.  I set him up with a little local-knowledge lure. For five or six hours straight, Jack stood in virtually the same spot, casting, as if in a trance, to the edges of the swift water, rewarded by an addictive stream of healthy 10- to 12- inch smallmouth bass and the occasional sunfish, all released to fight another day.

From downstream, I watched his rhythm evolve, as if learning a new song (emphasis on the bass line) as he methodically worked the edges of fast water. That evening, we were rewarded with the instant gratification offered by digital photographs I had taken: a slide show complete with music. Thank you, Apple. One-hour processing is no longer fast enough. 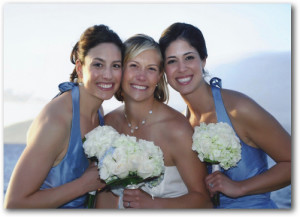 We cooked up a few “great-for-grilling” steaks and shared a bottle of a-little-too-new Chateau Neuf-du-pape. Last glasses in hand, we wandered across the street from our cottage, through the Bavarian Inn parking lot, and snuck around to a small deck overlooking the Potomac. Leaning over the railing, we nursed our wine, much better for the breathing, and a couple of satisfactory convenience-store cigars. We watched the trail of the moon dance across our familiar bend in the river. We talked of life and love, his three daughters; his oldest, Katherine, is my goddaughter. He said he planned to retire in two years and would love to find a small place on the water.

It was to be our last time together.

Five days later, Jack died. At age 59, with no apparent symptoms, he had had a massive heart attack. In a packed St. Johns Church, I sat with Katherine, looking for answers that would not come. Later, family and friends told me Jack had proudly emailed the snapshots from our day on the river to everyone on his list. Until answers come, these memories will suffice.

Eventually, all things merge into one, and a river runs through it. The river was cut by the world’s great flood and runs over rocks from the basement of time. On some of the rocks are timeless raindrops. Under the rocks are the words, and some of the words are theirs. I am haunted by waters.  –From A River Runs Through It by Norman Maclean