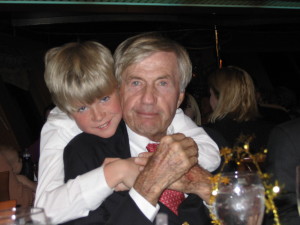 (A short eulogy written for my father-in-law, read at his memorial service in Rochester, Michigan, March 22, 2010)

If I speak with the tongues of men and of angels, but do not have love, I have become a noisy gong or a clanging cymbal.

Woody’s life was a song. He came in singing. He left us singing. He filled his days and his world with song—a song that never ends. And believe me, it is a love song. Even on the tennis court against him, you couldn’t escape LOVE.

I found boundless love in his family thirty years ago. My life with his daughter, Libby, began as a “Spring Sing” fairy tale, blessed by Woody, his beloved Grunyons, and a chorus of 500 Spring Singers joining in “I Found Love.” We’ve been riding that wave ever since.

Before becoming the teacher, Woody, I know, found himself on the receiving end. It can’t be denied the profound effect that Rosemary’s father, Dr. Robert Frehse, a congregational minister, has had on countless generations, and this family in particular. His favorite bible passage, 1st Corinthians, Chapter 13, is quietly revealed in the lives of each of his kin. It is the song that never ends.

Three hundred months and twenty-five yearly storage binders later, I still use a Franklin Day Planner. Woody gave me my first set, and more importantly, instruction on how to use it. For him, his planner was not so much about organizing dates, times, and events, but keeping track of the most important thing in his life…people. I think he knew, even then, that he needed a way to keep his ever-expanding list of friends at his finger tips, anticipating the day that his memory might fail him. You see, in business and in his personal life, Woody was the consummate matchmaker and always sought to put people together who had similar interests or backgrounds or could be of mutual support. There were no competitors—a rising tide lifts all boats. That spirit, his spirit, changed, fundamentally, how I see the world.

And now these three remain: faith, hope and love. But the greatest of these is love.

It’s a song that never ends. Thank you, Woody, for teaching us the refrain.

[Click to hear Woody’s solo in Shooby Doin’ performed with The Grunyons.]

Read more about Woody, his music, and his battle with Alzheimers in the wonderful book, Measures of the Heart, written by his daughter, Mary Ellen Geist.